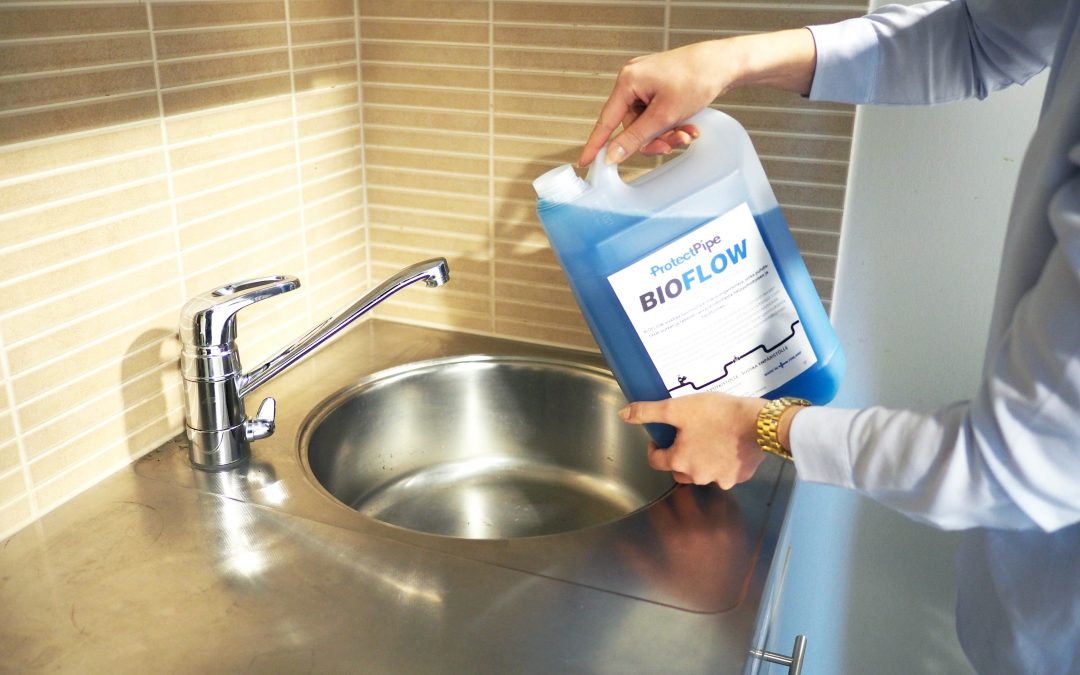 Organic waste that gathers in pipes is a significant reason for blockages in the pipeline, foul odors and fruit flies, both at home and at the summerhouse. The waste that ends up in the drain gets stuck easily to the challenging parts of the drainpipe. The accumulation of sludge makes it hard for the drain to work properly and it also creates an ideal growth environment for fruit flies right in the heart of the home.

As organic waste decomposes, it produces hydrogen sulfide, which has a very strong smell and is also hazardous to health. Hydrogen sulfide can spread from to the pipes to apartments, and it also emprittles the pipes. The environmentally friendly BIOFLOW microbe solution clears up organic waste from the pipeline and simultaneously decreases the amount of harmful wastewater that ends up in the fragile ecosystem of the Baltic Sea.

The waste buildup clogs the pipe and stops the drain from functioning properly. At the same time, the hydrogen sulfide formed in the decomposition process rises in the pipeline, embrittling the structure of the pipe and causing a premature need for repiping of the property. The strong odor of hydrogen sulfide resembles rotten eggs, and the gas is extremely odorous and unpleasant even in small amounts.

For one to get rid of the common problems with the drainpipe, must the whole pipeline be cleansed from organic waste buildup.

A rapidly growing Finnish microbiotechnology startup company ProtectPipe produces a solution with live microbe strains, that remove organic waste from the pipeline in a natural way. The microbe solution travels to areas of the pipe with buildup, and the active microorganisms literally eat the waste and turn it into harmless water and carbon dioxide.

In its simplicity,  the product works like this at home: 1 deciliter of the solution is dosed into the pipes daily for the first week, and monthly after the initial treatment. “The solution forms an active microbe population, that eats grease and organic waste buildup from the pipes, prevents harmful gases such as hydrogen sulfide from forming, and puts an end to odors and blockages. Basically, the solution treats the pipes in a preventive manner”, says Pauliina Martikainen, the Marketing Director at ProtectPipe.

The waste traveling to the municipal sewage system is currently one of the waterworks facilities’ biggest problems, so decreasing it could lead to more efficient water treatment and the freeing of resources to preemptively solve future challenges.

Bacteria Eat Away Grease From the Pipeline (Ålandstidningen 14.3.2017)

Finnish Company’s Microbes are Conquering the World – Next Step is to Cleanse the Cesspits and Drains of the Baltics (Tekniikka & Talous 10.8.2017)