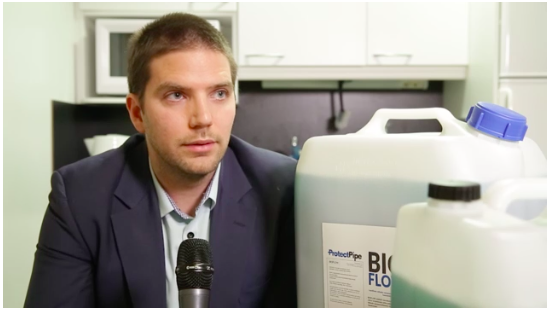 Microbiotechnology company ProtectPipe wants to save the Baltic Sea by repairing the drainpipes of ships.

ProtectPipe has started a pilot project with the shipping company Rederiaktiebolaget Eckerö in order to cleanse ship pipelines.

A microbiotechnology company that was founded last year, ProtectPipe promises to postpone the need for a piping renovation by as much as decades. The company produces a microbe solution with live bacteria that breaks down organic waste from drainpipes. Waste makes drainpipes brittle, since decomposing organic waste produces hydrogen sulfide. ProtectPipe’s microbe solution can break down fat, starch, cellulose, protein and the hydrogen sulfide they produce.

The main target groups of the company are building co-operatives and home owners, but ProtectPipe’s director of administration Hannu Keränen and co-founder Klas Alfthan also want to clean up wastewater coming from cruise ships.

“A ship is its own ecosystem. The goal of the pilot project is to find the optimal solution for cleaning the drainpipes of a ship”, says Keränen.

According to Alfthan, Eckerö Line doesn’t dump its wastewater into the sea.

Alfthan says that with the results coming from the Eckerö pilot, ProtectPipe will get an interesting example case for their international sales work.

Some of the clients of the company include the Åland islands’ water treatment plant and the Åland City Council, which, according to Alfthan, in its part protects the Baltic Sea.

“Our solution offers a quick remedy for the water treatment plant in the Åland islands. This would also be needed in the Baltics and in Poland, for example”, says Alfthan.

Dedicated to the protection of the Baltic Sea, ProtectPipe aims at extending its operations to all the countries surrounding the Baltic Sea.

Besides the Åland islands, ProtectPipe has expanded from the metropolitan area to Turku. Next, the company aims to expand to Tampere, Oulu, Jyväskylä, Lahti and Kuopio. ProtectPipe hires local sales people and acquires installation services from local subcontractors.

“Discussions on expanding to Estonia and Germany are also ongoing”, Keränen says.

The company will start selling its microbe solution for consumers online this week. For customers living in apartment buildings, ProtectPipe sells a pipe maintenance system with service agreement which costs around 4 euros per square meter a year. For restaurants and large commercial kitchens, the company installs a pump that automatically portions out the right amount of microbe solution into the drainpipe.

“The profit investment ratio, the view of one’s own pipeline through a pipe camera and hydrogen sulfide measurements are a real eye-opener for our clients. They have speeded up sales”, says Keränen.